Is it just me, or is it in vogue nowadays for advertising agencies to make ads disguised as “social experiment”?

I also find the term “social experiment” creative: who really believes that in these experiments they never did random assignments? To me this format is closer to the incarnation of the Candid Camera TV show. Honoring the tradition of planners’ fondness to neologism, maybe I should start calling this format “prankvertising“.

Anyway, I never have objections to formats or mediums in themselves. What matter is getting the right format or medium for the idea and the objective. One good example is this brilliant video Carlsberg Belgium that went viral around a year ago. Let’s see it:

I like the thinking behind it a lot. I salute the strategy to make Carlsberg being associated with open-mindedness and social connection without prejudice (the desired response). It’s an area that’s relevant to the audience’s culture and psychology. I also think these associations will increase the chance of Carlsberg being accessed during buying situations: isn’t beer is about ice-breaking? The stimulus part is also well-thought of and well-executed. It’s a fresh way to bring alive the theme of of “there’s a reward for those who’re willing to go beyond social prejudice”. The reactions of the “experiment subjects” (or the victims of the prank?) are priceless.

So, good for you, Carlsberg Belgium. Now Carlsberg Hong Kong is trying to adapt the same idea into their local context. Here’s how it looks like (hat-tip to Heather Le Fevre):

For me, the idea breaks apart. I agree with Le Fevre that this work can make Carslberg being associated with “intimidating” or “for audacious people”. I guess it’s just wrong to have the ‘bullies’ actively threatening the passerby. There’s no subtlety in this execution, and this makes it missing the mark.

At least these two executions remind me that when it comes to create another execution for one same idea that has been executed before, we have to be really strict and explicit in describing the elements the desired response (both cognitive and emotional) and in the stimuli.

What do you think, dear readers? Do you also believe the Hong Kong execution fails? If you do, what contributes to this? Or do you see that it’s actually a good execution of the same theme?

A big chunk of my day job —thankfully the one that I really enjoy— is developing the skills of junior planners in the agency. It is not just a job for me. I don’t see any reasons why Indonesia can’t have the industry’s world-class talents, and I want to help to make it happen.

Since last week, I have been having daily one-to-one mentoring sessions with a brand new planner. This person has worked in different agencies before, but not as a planner.

I plan to rewrite the material we discuss in each session as a blog post here. I reckon it should be useful for other rookie planners out there; or their bosses who need inspirations on how to train their neophytes; or anyone who’s interested to learn more about strategic planning for marketing communication. Who knows one day I can turn it into a textbook for planning?

So let’s kick off with the note from the first session.

I wish someone had taught me this simple yet fundamental lesson about communication when I started my career.

You can work in whichever discipline of marketing communication (PR, activation, direct marketing, digital, or advertising), and yet this fundamental principle remains the same: communication is about stimulus and response.

Response is what the audience grasps, understands, or remembers.
Stimulus is the way we can elicit the response in the audience’s mind.
Response and stimulus must correspond to each other, but they should not be  a mirror image of each other.

Communication is about stimulus-response

I’ll give you an example. Let’s say that I have to meet a bunch of new acquaintances. For whatever reasons, I want these people to get the impression that I’m funny.  This means, “Mita is funny” is the desired response.

To trigger this intended response, I can do several things. I can tell a joke, doing a funny dance, or wearing hilarious clothes.  The joke, the funny dance, and the hilarious clothes are the stimuli. However, there’s one thing that I should not do: telling them directly that I’m funny. This is what I mean by stimulus should not be the echo of the response. 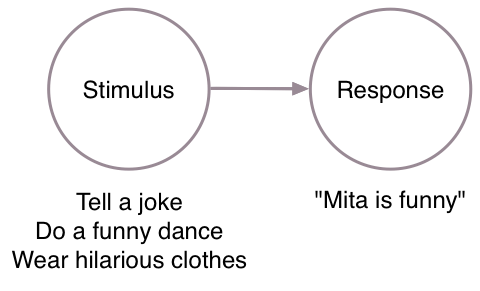 An example: how to convince new acquaintances that I'm funny?

Another ingenious example that we probably see only in Indonesia is female celebrities who normally don’t wear hijab put that attire on whenever they need to appear in courts. 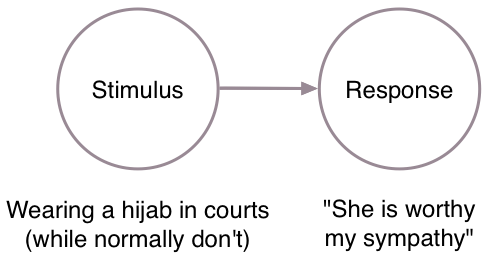 Why do female celebrities in Indonesia wear hijab if they have to appear in courts, while normally they don't?

Why can’t we simply echo the response in the stimulus? Will it not make the communication more direct and easier to understand? Don’t we see many TV commercials telling the audience directly that “Brand X tastes good” or that “Brand Y makes you beautiful”?

Just because you see many people do it, doesn’t mean the action is right.  If we insist on mirroring the stimulus and response, this is what can happen:

Determining the desired response lies at the heart of communication strategy. If we plan to communicate about anything for whatever purposes, the starting point should always be “What do we want the audience to remember?” not “What do we want to say?”

We should start with “What do we want the audience to remember?” because it forces us to be mindful that

This is what I called as audience-centric planning, and this is a deliberate act of respecting the audience. It’s not about what we have to tell them, it’s about what they want to pay attention to and remember.